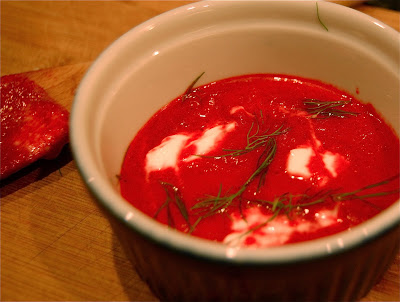 Despite my failed attempt at Irish brown bread last night, the pureed vegetable soup that I tried made up for my whole-grain failure. Inspired by the most recent issue of Bon Appetit magazine, I whipped up a brilliant magenta dish: Beet and Fennel Soup with Kefir. Unfortunately, the only type of kefir--a drink that looks and tastes like yogurt-- sold at the Fresh Market was pomegranate flavor, and since the recipe called for unflavored, I opted to substitute Greek yogurt for the ingredient. It is amazing that the simple trio of beets, fennel and Greek yogurt can combine to create such complexity in this dish. The intense ruby color of the soup makes the beets immediately recognizable, but beyond the intial sweet taste emerges the tangy undertones of the yogurt and the subtle licorice-like flavor of the fennel. I would have never thought to pair these three together, but their union makes for quite a delicous soup.