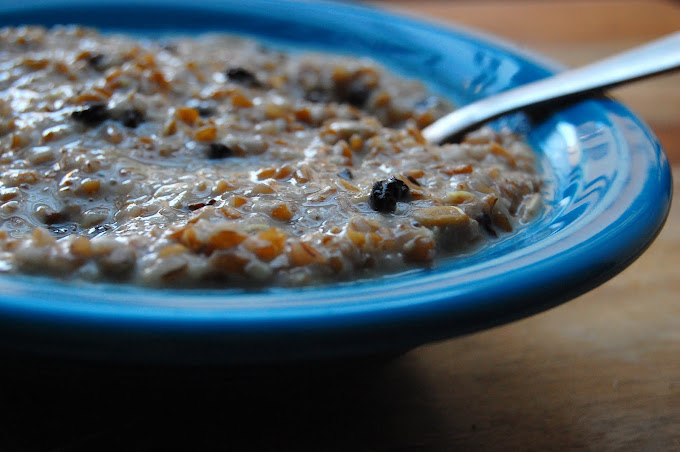 Rainy mornings beckon for the comfort of a bowl of warm oatmeal. But finding myself out of rolled oats on this particular dreary morning, I was forced to rethink my typical hot cereal routine. I recalled Heidi Swanson's creative alternative in Super Natural Every Day to use bulgar in place of oats. Her Lemon-Zested Bulgar Wheat involves simmering bulgar in coconut milk to produce a hot cereal much akin to the consistency of oatmeal. I was compelled to try this unique approach that takes bulgar out of its usual role in a grain salad or tabbouleh and brings it to the breakfast table. I conjured up my own variation of Heidi's breakfast bulgar, opting to use almond milk and my own set of fixings, including roasted sunflower seeds and currants. Spiked with lemon zest and drizzled with honey, this bowl brings a burst of sunshine to satisfy your morning. I can already see the clouds breaking.

1. In a small saucepan bring almond milk and 3/4 cup water to a boil. Add bulgar and reduce heat to a simmer. Cook for 10-20 minutes -- adding 1/4 cup at a time of additional water if it absorbs before bulgar is cooked through. The bulgar should be creamy, yet retain its texture.