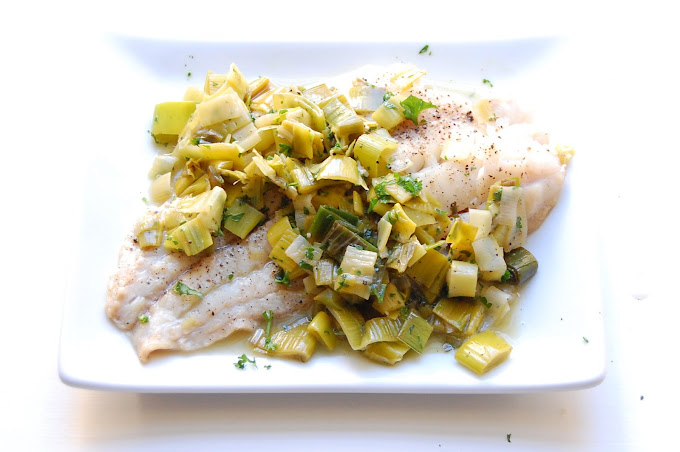 Steaming fish with vegetables is a foolproof way to serve up a main and a side dish in a single pan. The recipe for steamed fish in Mark Bittman's new How to Cook Everything: The Basics features a classic summertime cast of eggplant, zucchini and tomatoes, but I opted to go with a more seasonal variation featuring leeks. Simply sauteed in garlic and sauced up with a little white wine, the leeks become a fresh-yet-buttery steaming machine.

A thick, mild-flavored white fish pairs particularly well in this case – hake was my pick, but cod or halibut would be great too. Set atop the bed of leeks, the fish cooks in the steam as the vegetables bubble beneath. Lid on, it takes just about ten minutes for the flesh to become perfectly opaque and flakey. The leeks finish cooking with the fish, and, brightened with curly parsley and a squeeze of fresh lemon juice, are transformed from steamer to a delicious side.

STEAMED HAKE WITH LEEKS
[Adapted from How to Cook Everything: The Basics]

1. Trim and slice 4 leeks (the white and light green parts) and rinse them in a colander to remove all grit.

2. Put 2 tablespoons olive oil into a large skillet over medium-high heat and add 2 chopped garlic cloves. Cook the leeks in the hot oil, stirring occasionally, until they’re tender and begin to turn golden, 5 to 10 minutes. Add ½ cup white wine or water and bring to a gentle bubble.

3. Sprinkle the fish with salt and pepper and lay it on top of the leeks. Adjust the heat so the mixture simmers. Cover and cook until the fish is opaque throughout and a paring knife inserted into the fish at its thickest point meets little resistance. This will take anywhere from 5 to 12 minutes, depending on the thickness of the fish.

4. Transfer the fish to a plate, then stir fresh parsley and lemon juice into the leek mixture. Spoon the leeks over and around the fish, drizzle everything with the remaining 1 tablespoon olive oil, and serve. 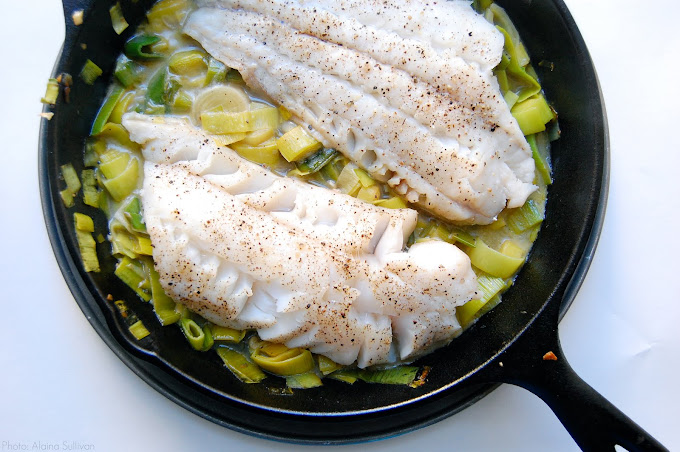