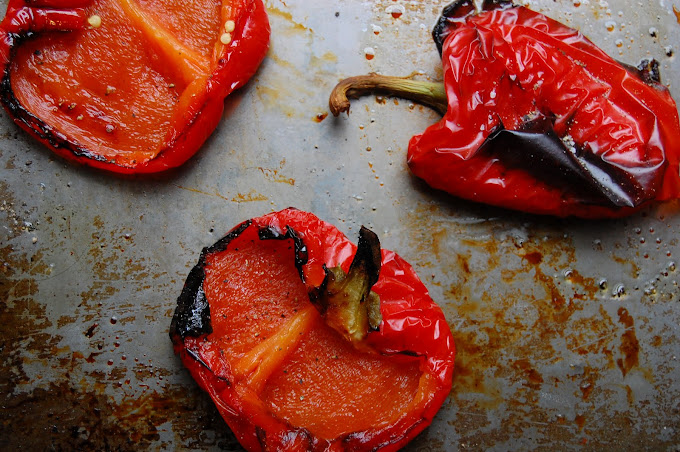 Aside from color, a roasted pepper bears little resemblance to its raw counterpart. After a stint in the oven, the skin becomes charred and wrinkly, sagging around the flesh it once held so tautly. The molten inside easily sheds its blistered skin – emerging incomparably more succulent and sweet than the raw version. It's an exquisite transformation, easily achieved in the oven, under the broiler, or over an open flame -- heat, in each case, being the operative ingredient. 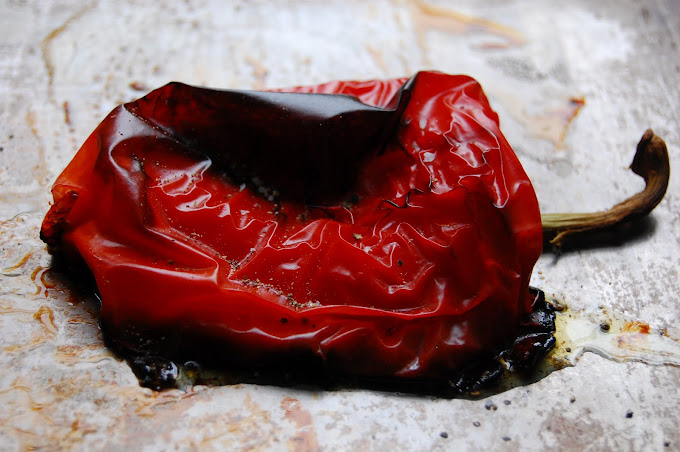 ROASTED RED PEPPERS
[Adapted from How to Cook Everything: The Basics]
Makes: 6 to 8 servings


1. Heat the oven to 450°F or position the rack under the broiler about 4 inches from the heat source and turn it to high. Halve the peppers, leaving stems intact if you like, and remove the seeds. Put the pepper halves on a rimmed baking sheet lined with foil, cut side down. Roast for about 25 minutes (or 10 if broiling), then flip and cook another 15 to 20 minutes (10 if broiling), until skin is dark and blistered and peppers begin to collapse. (Note: You can also roast the peppers whole, then remove seeds and stems after they cool).

2. Gather up the corners of the foil from the pan and tightly wrap the peppers (use a kitchen towel to help if the foil is too hot). Cool until you can handle them, about 15 minutes, then remove the skin. (You can do this under running water to make it a little easier.) Don’t worry if the peppers fall apart.

3. Serve the peppers within an hour or so, sprinkled with a pinch of salt and drizzled with 2 tablespoons olive oil, or more if you like. (Or drizzle them with 1 or 2 tablespoons of olive oil and store them in the refrigerator for up to a few days; bring them back to room temperature before serving.)

Note: If you want them really charred and smoky-tasting, you’ve got to use the broiler, or better yet, a grill. To roast peppers on a grill: Prepare a grill; the heat should be medium-high and the rack about 4 inches from the fire. When the fire is hot, put the peppers directly over the heat. Grill, turning as each side blackens, until they collapse, 15 to 20 minutes. Then continue with Step 2, using a piece of foil to wrap them after they come off the fire. 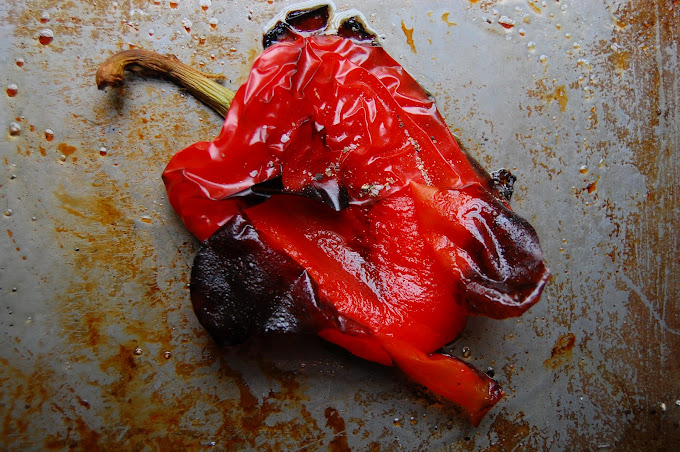 Besides the simplicity of the process, the beauty of roasted peppers is their supreme versatility. It's hard to resist devouring the warm, slimy flesh straight from the tray -- fingers-to-mouth, or, more civilly, with a fork and good olive oil. But they also add flavor and substance to sandwiches, pizza, bruschetta and pasta, make killer condiments (with some yogurt and spices), as well as bright pureed soups... 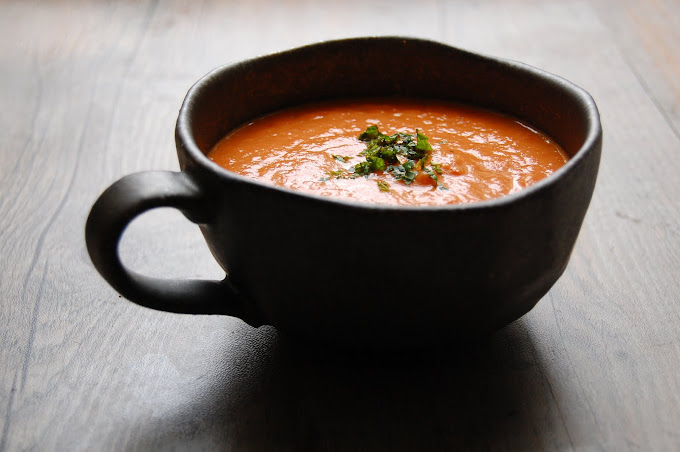 1. Heat oven to 450°F. In a foil-lined baking dish add campari tomato halves, red onion, and garlic. Drizzle with olive oil and sprinkle with salt and pepper. Toss to coat then place in oven and roast until tomatoes begin to release their juices, and onion and garlic are soft and browning, about 10 minutes or so. Remove from oven and set aside to cool.

3. Transfer soup to a bowl, cover, and place in the fridge for at least an hour to cool fully and allow the flavors to meld. Serve chilled and garnish with freshly chopped mint.