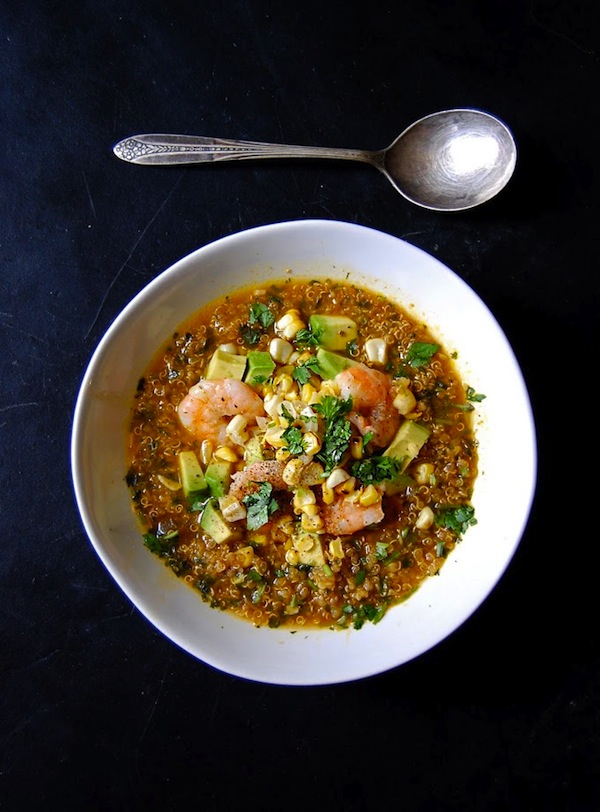 A recent screening of I Like Killing Flies inspired this recipe. The film documents the eccentric antics of Kenny Shopsins, chef and owner of the (formerly) Greenwich Village-based diner, Shopsins. Despite his notoriously profane behavior towards customers and his "no-party-over-five" rule, his restaurant boasts an inclusive menu that puts Encyclopedia Britannica to shame, and never stops growing. A brief soup montage in the film rattles off a few of (the 86) brothy favorites, and the cilantro & quinoa combo particularly caught my attention. No idea what else was in Shopsins' recipe, but taking the title ingredients at face value, I rolled with it. Mostly I was intrigued by the idea of elevating an herb from its role as garnish to star of a dish. Of course quinoa is there to bulk up the broth, but I wanted to make the presence of cilantro more than just background noise, so I went pretty gung-ho with it. The supporting cast is simple -- red onion, garlic, coriander, salt/pepper, and a pinch of cayenne -- but the soup has a surprising amount of personality. Here it's topped off with a summery trio: grilled shrimp, diced avocado, and charred corn-off-the-cob, (and, of course, more fresh cilantro).

1. Heat olive oil in a medium pot over medium-high. Add garlic and cook for a minute, stirring constantly. Add sliced red onion and cook until softened, about 3 to 5 minutes.

2. Rinse 1 cup quinoa and add it to the pot with the onions and garlic. Stir to coat and cook for a minute or two, until quinoa becomes fragrant and toasted. Add 4 cups vegetable stock and cilantro and bring to a boil. Reduce heat and simmer for 15 minutes until quinoa is cooked. (Add more stock or water if the soup is too thick). Season with salt, freshly cracked black pepper, ground coriander, and a pinch of cayenne. Squeeze in juice from 1/2 lime. Taste, and adjust seasoning as necessary.

[Another variation: Toss in some arugula while the soup is simmering; when the greens are wilted, crack in a few eggs, cover pot, and let them cook until set. Serve with some freshly grated Parmesan.]