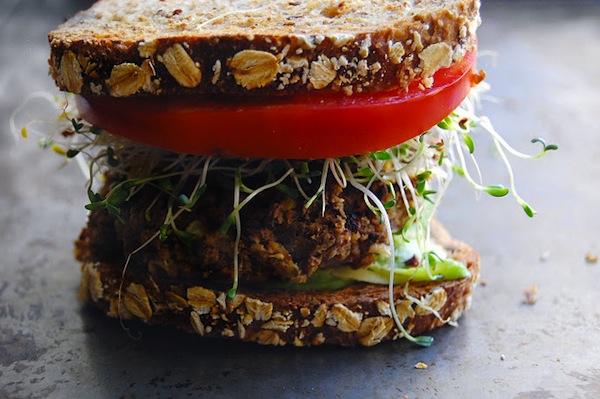 Veggie burgers get a bad rap. And to be fair to the carnivores that scorn them, it's true, aside from shape, there's barely any resemblance between patty-shaped veggies and the juice-dripping ground meat we Americans have established as the appropriate manifestation of the word "burger." Still, there is much to be argued for the vegetarian counterpart. For one, veggie burgers demand creativity -- since ground vegetables can't hold their own against the grill like meat can, they need some backup. This is where things get fun. Gena Hamshaw, author of the blog Choosing Raw, suggests the "you pick (at least) three" method of curating your veggie burger base. This should include a veggie (corn, zucchini, mushrooms, beets, sweet potato...), a grain (ie. quinoa, oats, rice, breadcrumbs...), a legume (beans, chickpeas, lentils...), and/or a nut (walnuts, pistachios, almonds, cashews, sunflower seeds, pepitas...) From this formula, the possibilities are limitless, and the process becomes a challenge to find the tastiest combination.

For my burger I pulled from all four categories--

Then I spiced the mixture up with cayenne, coriander and cumin, channeling the Southwest flavors suggested by the corn-black bean duo, and finished it off with fresh lime juice and basil. The flavor was so awesome that it was hard not to skip the burger-making and just take a spoon to the bowl. (And really, you could just stop right there and start dunking chips). But I resisted the urge, formed my patties, and grilled them up. Despite the fact that they are indeed more prone to crumbling than meat burgers, that shortcoming is forgiven when you take a bite. The slightly charred crust gives way to an explosion of flavor that summersaults over your tastebuds -- at once fresh, nutty, sweet, spicy. It won't matter that this burger isn't a juicy mass of meat -- it's not supposed to be.

Rinse 1/3 cup quinoa, place in a small saucepan with 2/3 cup water and some salt; bring to a boil. Reduce heat and simmer with lid ajar for about 15 minutes, until water is absorbed and you see thin rings detaching the quinoa grains. Fluff with a fork, cover, and set aside.

Meanwhile, pulse shelled pistachios into a course meal in a food processor with some salt and pepper. Add the black beans, quinoa, lime juice and basil and pulse to combine (you want the beans to break down slightly and the mixture to hold together, but the consistency should still have some texture, so don't process for too long). Transfer to a mixing bowl and fold in the sauteed corn and onions, using your hands to combine. Season with cumin, coriander, cayenne pepper, salt and black pepper, to taste. Shape mixture into 6 round patties.

Heat grill pan or cast iron skillet over medium-high. [Note: You can also attempt on an open grill, but be wary of the patties' crumbly tendency on the flip. You might want to use a grill pan let you lose half of the burger through the grate.] If cooking on stovetop, heat a bit of olive oil in your skillet then add burgers and cook for about 5 minutes on each side (again, careful on the flip).

Alternatively, you can cook the burgers in the oven at 375 dgF for about 25 minutes (flipping halfway). I like to do a skillet cook first to get both sides brown and crispy, then finish off in the oven to help them heat through and hold their shape. (About 3 to 4 minutes each side in the skillet, then 10 additional in the oven.)