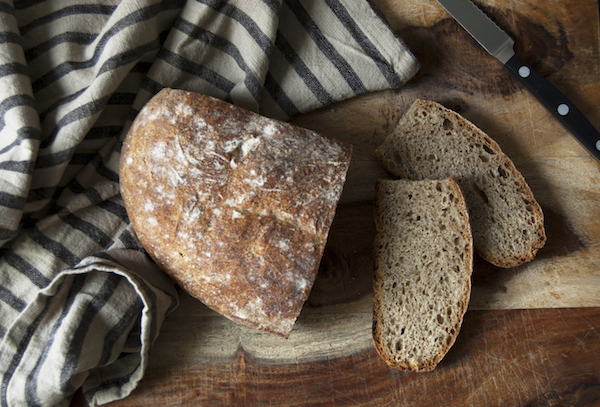 I've been on a bread baking jag lately. After a series of disappointing loaves (too dense, too crumbly, bad crust, the list unfolds...), I was discouraged by the process, but resolved to break the spell. Was I letting it rise too long? Not long enough? Was the water too hot? Did I knead it properly? Was it too drafty or too cold in my apartment? Was the flour ratio off? Really, it could have been any of the former. Baking yeast-risen bread is a delicate science -- it takes precision and patience to get it just right. And even when you think you've finally nailed the ratios, something as minor as oven temp could affect the end result.

So, after chucking a few too many loaves, I decided to go back to basics. I pared down the variables and revisited a technique that has been known to perform time again -- the no-knead loaf. It's a process that takes kneading out of the equation entirely, developed (or at least made famous) by Sullivan Street Bakery guru Jim Lahey and fondly embraced by many-a-baker. You simply combine your ingredients -- a humble cast of flour, salt, water, yeast and let time do the work. It's nearly effortless and yes, it got me out of my rut. 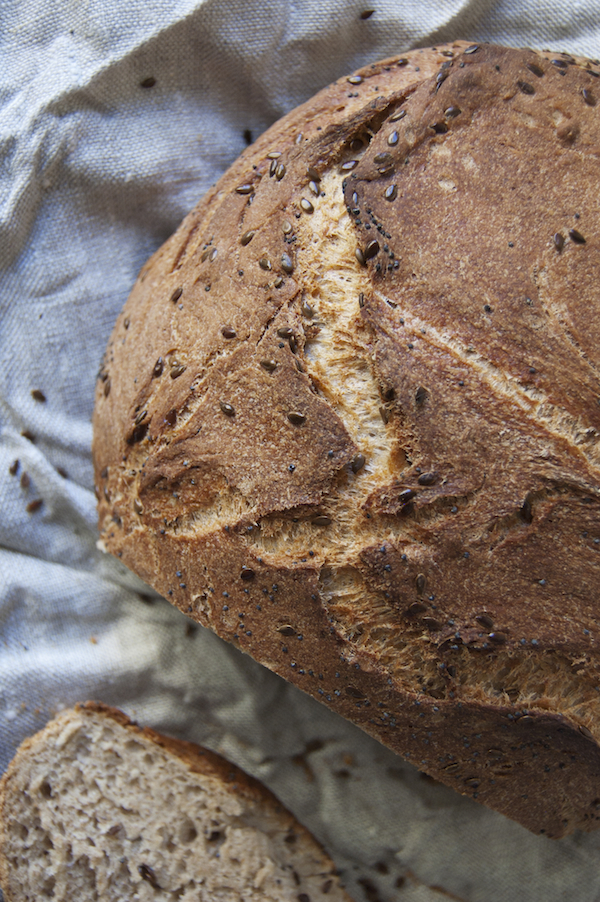 Now it's almost a ritual. I'll wake up, mix my dough, let it rise while I go to work, come home and bake it that night. I find my best loaves have a few common denominators: (a) they sit for at least a 12-hour first rise (up to 18), followed by a 1.5 to 2-hour proof (second rise), (b) they have a flour ratio of 2:1 bread flour to another flour (whole-wheat and rye are both proven sidekicks, but I plan to experiment with others), and (c) they bake inside a pre-heated enamelware pot (this creates the effect of an oven inside an oven, yielding an exceptional crust).

After you do it a few times you'll recognize the feel of a dough that's bound to be successful. When I was mixing one test loaf (a combo of white whole wheat and spelt flour), I knew from the get-go that it was destined to fail. It just didn't have the same texture as the bread flour versions I had made. (I baked it anyway, and yeah, it was terribly dense and dry and landed in the trash.) With bread flour the result has much more air to its crumb. But hey, you win some, you lose some. On to the next one.

In a large bowl combine flours, yeast and salt. Add water, and stir until combined; dough will be sticky. Cover bowl with plastic wrap. Let dough rise at least 12 hours (up to about 18) at warm room temperature, about 70 degrees. When dough's surface is dotted with bubbles, it is ready. Dust a work surface with flour and turn dough out onto it. Sprinkle dough with flour and fold it over on itself a few times. Shape it into a round and wrap dough in a flour-dusted cotton towel, seam side down. Let dough rise another 1.5-2 hours, until double in size. It will retain a finger poke when it is ready.

About 30 minutes before the dough is ready, heat oven to 450 dgF. Place a heavy cast-iron, enamel or ceramic pot in the oven as it heats (I use my 5-qt Le Creuset). When dough is fully risen, turn it into the preheated pot, seam side up. Cover pot with lid and bake for 30 minutes. Remove lid and let bread bake another 15-20 minutes, until golden brown. Cool for at least 15 minutes before slicing and serving.