Stack of the Day 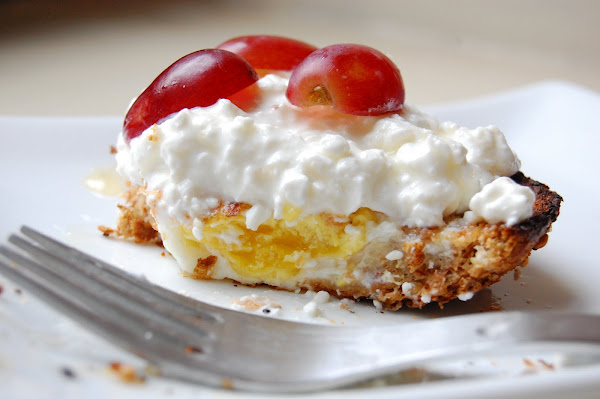 I recently re-watched the movie "V for Vendetta" and this time, instead of the message, "Remember, remember, the Fifth of November," it was the breakfast that made an appearance twice in the flick that stuck with me--namely, the One-Eyed Jack. Or.... Hen in a Nest, Chicken Egg Nest, Sunshine Toast, Moon Egg, One Eyed Monster Breakfast, Cowboy Egg, Toad in the Hole, Egg in a Frame, Eggs in a Bucket, Eggs in a Nest, Eggs in a Hole, Egg Toast, Pharaoh's Eye -- all names for one simple breakfast pairing -- an egg and a slice of toast, fried together. Removing a hole in the middle of the piece of bread holds the egg in place as they meld together magically during the cooking process. Sounds and looks easy enough, though I've never made it before so today I felt compelled to give it a whirl (adding a creative twist). In my version, cottage cheese, grapes and honey join the protein-carb power duo adding a textural dimension of both creaminess and crunch, as well as a fresh sweetness to contrast the savory flavors of the dish. Mmm nothing like a tastebud rollercoaster to get your morning started.

Directions:
1. Cut a round hole in the center of the slice of bread (a shot glass works well).
2. Heat a small amount of oil in a small skillet over medium heat. Add the slice of bread and cook until lightly browned; flip and cook until the other side is slightly browned.
3. Return bread to its original side and crack one egg in the center hole. Allow the egg to cook for a few minutes on that side -- make sure you allow the egg time to fuse with the bread -- if you try to flip too early it will fall through the hole. Flip and cook an additional several minutes until the egg is cooked to its desired degree of doneness.
4. Plate the one-eyed jack and top with 1/4 cup of cottage cheese. Drizzle with honey and top with grapes.