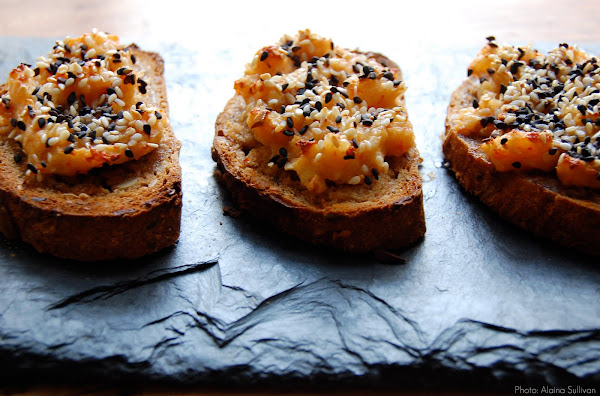 With the holidays quickly approaching, now’s the time to equip yourself with an armory of crowd-wowing apps. This recipe for sesame shrimp toasts will have you forgetting that shrimp cocktail you always have on standby. Departing slightly from the traditional dim sum version, this shrimp toast is made up of thick shrimp paste baked (not fried) on top of crusty bread. Scallions, soy sauce and sesame oil provide the classic Chinese flavors (I added some garlic and ginger for good measure.) Sesame seeds, scattered over the top, toast in the hot oven until fragrant and crunchy.

The moisture from the shrimp paste will inevitably leech into the bread as it cooks, so it is important that you pre-toast the bread initially to avoid an overly soggy middle. However, part of the magic of the dish is how some of the juices seep through, forming a delicious glue that fuses the shrimp and the toast into one perfect bite.

Heat the oven to 475 degrees F. Slice a baguette in half lengthwise, put the halves face up on a baking sheet, and set them in the oven while it heats. Put shrimp (I used about 20 black tiger) in a food processor with some butter, scallions, soy sauce (about 2 tsp), a few drops of sesame oil (about 1/2 tsp), and a pinch each of sugar and salt. Pulse until the mixture forms a chunky paste. Smear the shrimp past all over the bread and sprinkle with sesame seeds. Bake until the shrimp paste is pink and cooked through and the bread is crisp, about 10-15 minutes. Cool a bit, then cut up and serve with a salad.

See this recipe and more at markbittman.com