Tis the Season for Green and Red 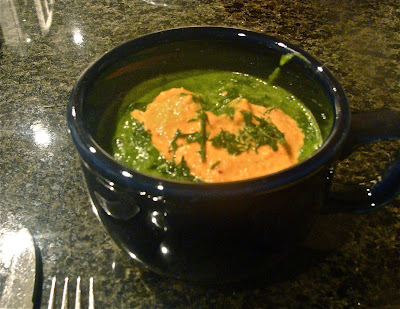 Let me preface this post by admitting that although I usually don't dabble much in Reality TV-watching, I became religiously devoted to "The Next Iron Chef" on Food Network this past season. After weeks of challenges and astounding culinary creativity to gain the newest throne in Kitchen Stadium, one superb chef -- Marc Forgione -- came out ahead of the rest. But the true test of his prowess came the week following the show's finale -- his first official Iron Chef battle. And the secret ingredient for that episode was: Bell Peppers.

When I set out to attempt the intriguing recipe I saw in Cooking Light -- Fennel and Spinach Soup with Roasted Pepper Yogurt , I did not intend or expect to produce a cuisine that could have reigned supreme in Chef Forgione's Battle Bell Pepper. But after tasting the magic produced by simply combining roasted red peppers, greek yogurt, lemon juice and lemon zest in a food processor, I'm convinced my dish could have put up a solid fight.

A complementary pairing in color and taste, the Fennel and Spinach Soup topped with the Roasted Pepper Yogurt was a winner to my taste buds. It was an interesting role reversal with regard to the respective temperatures and colors of each part -- the cool, green soup was actually the warm part of the dish, while the warm, red-colored yogurt sauce acted as a cooling agent in this case. Here's the recipe:

4. Pour half of fennel mixture into a blender. Remove center piece of blender lid (to allow steam to escape); secure blender lid on blender. Place a clean towel over opening in blender lid (to avoid splatters). Blend until smooth. Pour into a large bowl. Repeat procedure with remaining fennel mixture. Return pureed soup to pan; heat over medium heat 2 minutes or until thoroughly heated.

The recipe is really quite outstanding and the roasted pepper yogurt is honestly good enough to drink. I had the soup the following day for lunch and added some leftover chicken to make it into a hearty meal. And I polished off the red pepper yogurt -- drizzling it over leftover Ahi Tuna, using it as a dipping sauce for crusty bread -- there was not a speck left after I licked the bowl clean...