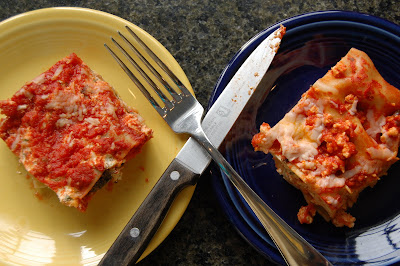 Feeling ambitious last night, I decided to pair two different types of lasagna against each other in a Bobby Flay-style "Throwdown." The first, a traditional meat-sauce-cheese version catering to my younger brother's simple, carnivorous preferences; the second, a meatless version with a sauteed vegetable and pesto filling for a more adventurous palate.

I used no-boil whole wheat noodles, shredded mozzarella and Parmesan in both dishes, providing a few constants between them. It was a quite a whirlwind trying to make them at the same time and keep the ingredients straight. Needless to say, one mess of a kitchen and an hour of baking later, the true test of the throwdown between traditional and non-traditional began with the fork. 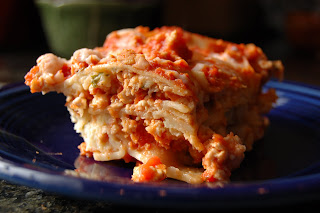 2. Cook the turkey in a large saucepan coated with cooking spray over medium heat until browned, stirring to crumble. Add water and pasta sauce; bring to a boil. Cover, reduce heat, and simmer 10 minutes. Remove from heat.

3. Combine 2 cups mozzarella, cottage cheese, and next 4 ingredients (cottage cheese through pepper) in a bowl.

5. Cover and bake at 350° for 1 hour. Sprinkle with remaining mozzarella cheese, and bake, uncovered, for 10 minutes. Let lasagna stand 10 minutes before serving. 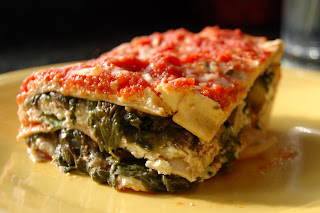 Directions:
1. Arrange the spinach in a vegetable steamer; steam, covered, 3 minutes or until spinach wilts. (Repeat process if it doesn't all fit in one batch). Drain spinach, squeeze dry, and coarsely chop.

3. Combine spinach, mushrooms, and pesto to the zucchini-onion bowl, stirring to coat; set aside.

4. Combine mozzarella, ricotta, and egg substitute in a medium bowl, stirring well to combine. Stir in 1/4 cup Parmesan, and set aside.

5. Combine the pasta sauce and the tomato sauce in a medium bowl.

7. Sprinkle with the remaining Parmesan. Cover and bake for 45 minutes. Uncover and cook an additional 15 minutes until heated through.

Turkey Lasagna-- Hearty, meaty, cheesy, classic. The cottage cheese gave it texture and flavor that the ricotta lacked in the veggie version. Overall, the layers held together well and each forkful landed a clean bite. Impressive cohesiveness of the ingredients.
Pesto Lasagna--The drier ricotta suited the moistness of the veggies, though it dominated texturally. The flavor of the pesto came through, though the spinach was the strongest component of the filling--I wished the mushrooms would have had more of a presence. I thought the red sauce was slightly lost within the layers, but its abundance on the top made up for the lack below. Compared to the turkey lasagna, the layers of this dish tended to slip and were more separate.
Being so different it is hard to pick a winner -- each lasagna had its own strengths. I loved the turkey lasagna as a meat version; its use of cottage cheese made it a standout compared to other classic varieties I've had. The pesto-veggie was more inventive and had a complex layering of flavors; the trio of spinach, mushrooms and zucchini was excellent and the incorporation of both pesto and red sauce was an interesting twist. I might try to combine the two in the future -- perhaps adding the meat sauce to the pesto-veggie version and swapping the ricotta for cottage cheese would produce a super-pasta sensation...