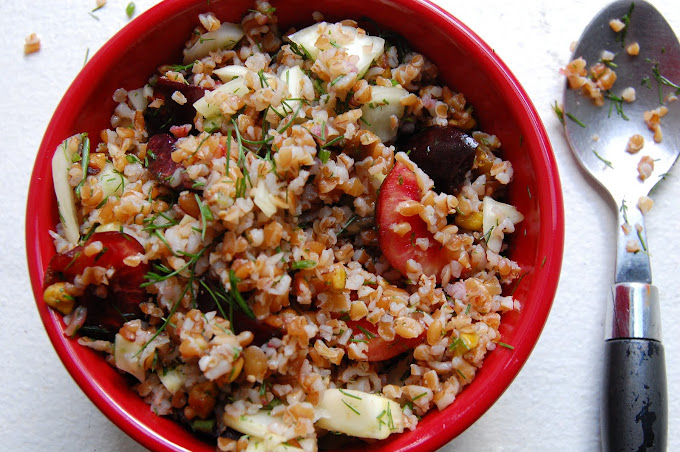 I haven't made bulgar in a while, mostly out of laziness. I usually get home at night, ravenous, and head straight for the quick-absorbing grains (think couscous, quinoa or a whole-grain penne if I'm in a pasta mood). None of this wait-an-hour nonsense that comes along with cooking bulgar. (Patience is something I am short on). But on afternoons where I have time to throw some boiling water over those little grains and let them perk up in the fridge before dinner time, I opt the bulgar route and it always delivers. I had an urge to revisit some of the tasty bulgar salads I have in my repertoire this week, so I mustered up some patience and got creative...

The great thing about grain salads is that they are endlessly adaptable and always complex in flavor and texture. I don't think I have ever made the exact same one twice, but that is not to say I don't have my favorites -- one version that I always come back to pairs fresh cherries and pistachios -- a killer combo. With some cherry abundance this week I ran with that idea, throwing in some fresh dill and fennel and drizzling it all wth a sweet lemon-honey dressing:

1. In a medium bowl combine 1 cup bulgar with 1 cup boiling water. Cover and allow to sit for an hour or more until water is absorbed.

3. Combine bulgar with cherries, fennel, dill and pistachios. Drizzle with dressing and stir to coat. Serve cold or at room temperature. 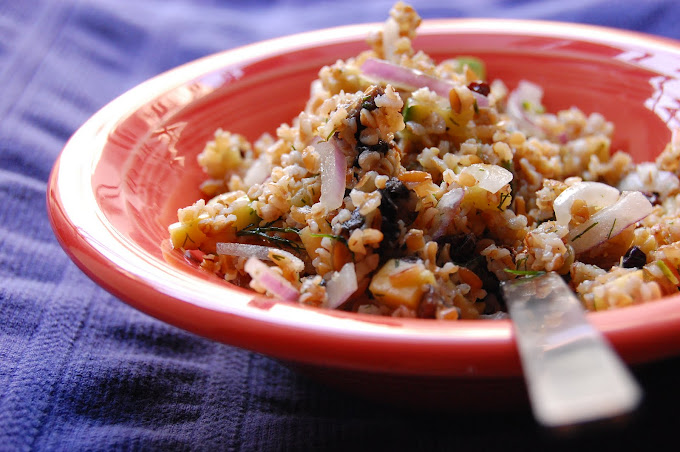 Heidi Swanson of 101 Cookbooks loosely inspired my second bulgar salad of the week. Her version uses quinoa as the grain base and features currants, zucchini and dill -- a trio that I found both intriguing and seasonally appealing as summer squash abounds in the Farmer's Markets. A perfect recipe to use up my remaining dill as well. Instead of grating the squash as Heidi did, I sauteed it slightly to make it tender and threw in diced cremini mushrooms to add meatiness to the dish.


1. Combine bulgar and currants in a medium bowl. Add 1 cup boiling water; cover and let sit for 1 hour until water is absorbed.

2. While bulgar is resting, heat oil in a medium cast iron skillet. Add zucchini and yellow squash (about 2 1/2 cups total) and saute until tender but not mushy. Remove from skillet and add mushrooms with another splash of olive oil. Saute for several minutes until fragrant and soft. Add mushrooms to bowl of squash and set aside.

3. After bulgar has sit for an hour or more, combine with sauteed zucchini, squash and mushrooms.

4. Quarter a small red onion and thinly slice, allowing it to rest in ice water for about 15 minutes to cut the pungency before draining and adding to bulgar mixture.

5. Zest one lemon and stir it to the bulgar along with 2 Tbsp fresh squeezed lemon juice, 2 Tbsp olive oil and fresh dill.

6. Serve cold or at room temperature topped with crumbled feta or goat cheese and additional dill for garnish.