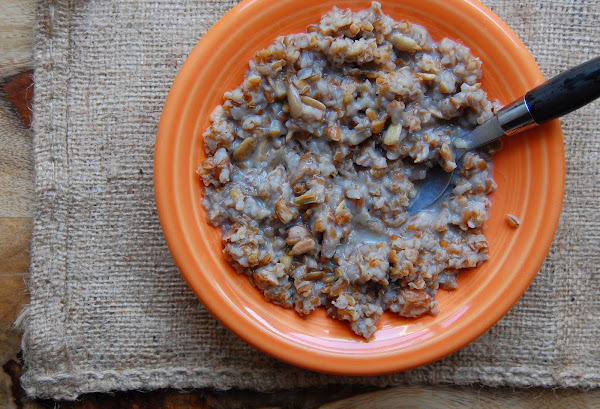 Bulgar once again makes its claim as a breakfast grain, stirring up the standard oatmeal routine. More resistant to liquids than the super-absorbant oat, bulgar retains an al dente quality as it cooks -- the result is a hot cereal with more textural interest than its uniformly creamy counterpart.


Here, smooth banana enters the scene, perfuming the bulgar with a subtle fruity note. Laced with honey and punctuated by the crunch of sunflower seeds and almonds, this bowl is like taking a spoon to a loaf of banana bread.

1. In a small saucepan, bring soymilk and 3/4 cups water to a boil. Add bulgar and reduce to a simmer. Cook for 15-20 minutes -- adding 1/4 cup at a time of additional water if it absorbs too quickly.
2. As the bulgar is cooking, mash one banana and roughly chop the almonds (mind your fingers). Set aside.
3. When the water is nearly absorbed -- the bulgar should be creamy, yet retain its texture -- stir in 1 Tbsp honey, the banana, almonds and sunflower seeds.
4. Serve with additional honey drizzled on top and/or more milk as you prefer.

Notes: The soymilk could be swapped out for another type of flavored milk (almond, coconut, etc.) for a different flavor; I used what I had on hand.