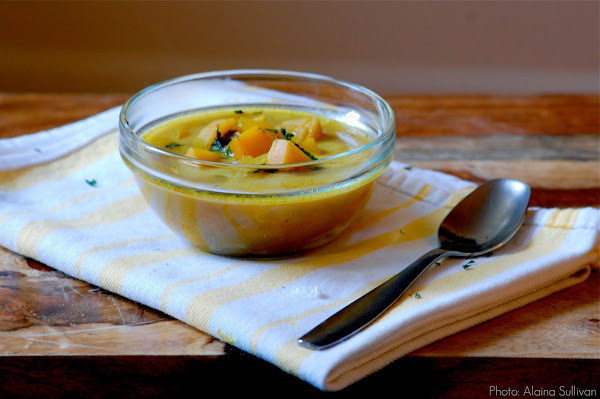 The advent of crisp weather implores bowls of belly-warming comfort. Soup – the hearty, inexpensive and endlessly versatile star of the season – has a way with taming the tough roots and squashes at the markets these days. Take the butternut squash: despite a sharp chef’s knife my hand was not left unscathed by blisters as I muscled my way through its thick skin and dense flesh. But a bubbling broth is all it takes to transform the squash into a softy.

Squash soups typically rely on a blender to give them a luxuriously creamy consistency, yet this version achieves richness without being pureed to a pulp. Small cubes of butternut squash simmer in a milky-sweet broth, and they hold their shape all through cooking. The soup becomes creamy by way of coconut milk, which contributes a rich flavor without weighing it down. Curry, cinnamon and cumin spike the broth just enough to accent the squash without masking its natural flavor. The curry and coconut shine together as they usually do, but it’s the cinnamon that brings a warm, unexpected undertone to the dish.

It’s a soup that sits in limbo somewhere between creamy and brothy, sort of the best of both worlds. Garnish with fresh cilantro or mint. Recipe sketch from Mark Bittman’s Kitchen Express. See the recipe and my post on Bittman's website.

Cook two cups of chopped squash in a few tablespoons of vegetable oil, along with a diced onion, a teaspoon of cumin, a half teaspoon of cinnamon, and a teaspoon of curry powder (or more to taste). Cook the vegetables and spices until the onion is soft, about three minutes. Add five cups of chicken broth or water and a cup of coconut milk; bring to a boil and cook for about six minutes or until the squash is tender and easily pierced with a knife. Serve the soup topped with fresh cilantro and crusty bread or a scoop of rice. 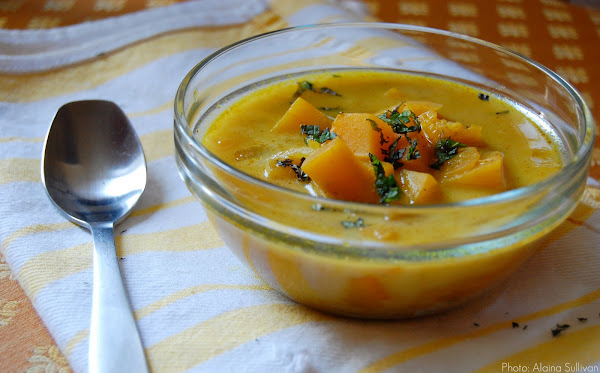