Bring A Spoon to the Superbowl... 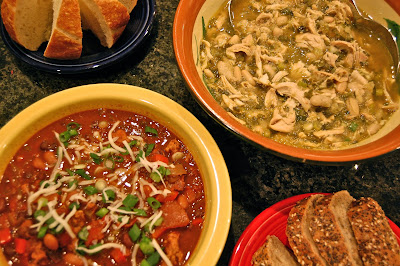 In honor of the Superbowl throwdown between the Steelers and the Packers last night, my dad and I had a chili throwdown. His -- a white chicken chili; mine -- a recipe already in my armory -- Chipotle & Chocolate Chili. I knew I had to revise the original version I made, since the first time around there was too much heat for my mom and brother (who were the appointed judges for the throwdown...) 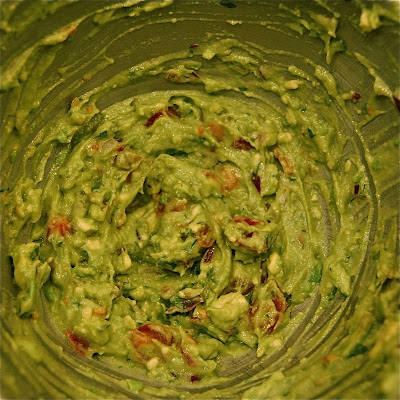 While they noshed on a quick guac that I whipped up....avocado, diced onion, tomato, cilantro and lime juice...Dad and I got to work.

After a few hours of battling in the kitchen, (followed by attempts to out-do each other's presentation for the judges), we all found it was hard to compare the two -- they were very different in their ingredients and each had its unique strengths. My dad's white chicken chili had a light, cannellini bean base with ample amounts of onion and several varieties of peppers that had been processed almost to a pulp. Though jalapenos were included, they were de-seeded, so there wasn't much heat to the chili, and in my opinion the shredded chicken came to overpower the flavor. Still, it was a delicious blend of ingredients.

My chili was the complete opposite -- it was dark and had a rich, smoky flavor. There was a perfect balance of heat and sweet from the union of chipotle peppers and chocolate. Last time I made the chili I used ground turkey, and since I often find ground meat a somewhat boring addition to chili dishes, I decided to do get creative. (Plus I had to separate my dish from my dad's to win points with the judges!) So I formed the ground turkey into small meatballs to maintain the meat's integrity and keep it from getting lost in the chili. This revision was noted by the others as a favorable aspect of the dish.

In the end, there wasn't a clear winner of the throwdown, however, my brother later told me under the radar that he thought mine was more "chili" while my dad's was more "soupy"...so I take that as an indication that mine was the favorite.

Here are some shots of the dueling dishes, followed by my revised chili recipe. 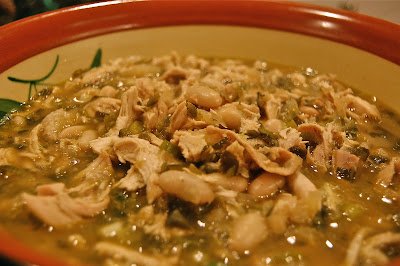 The recipe he used was from Cook's Illustrated and incorporates the following ingredients: 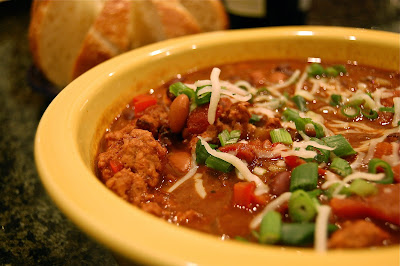 Directions:
1. Assemble turkey meatball mixture -- combine ground turkey, 1 egg, 1/4 cup finely chopped onion and 1/4 cup fresh breadcrumbs in a medium mixing bowl. Set aside.
2. Heat a Dutch oven over medium-high heat. Coat pan with cooking spray. Add onion, bell pepper and garlic to pan; sauté 8 minutes or until vegetables are tender.
3. Add sugar and next 9 ingredients (through chipotle) to pan, stirring to blend; bring to a boil. Reduce heat; simmer 15 minutes or until slightly thickened, stirring occasionally.
4. Meanwhile, heat oil over medium-high head in a cast iron skillet. Using a spoon, dollup bite sized meatballs into the pan; cook for a few minutes on each side until browned and cooked through.
5. Add meatballs and unsweetened chocolate to the chili, stirring to melt.
6. Ladle chili into bowls; top each serving with 1 tablespoon sour cream. Garnish with green onions.