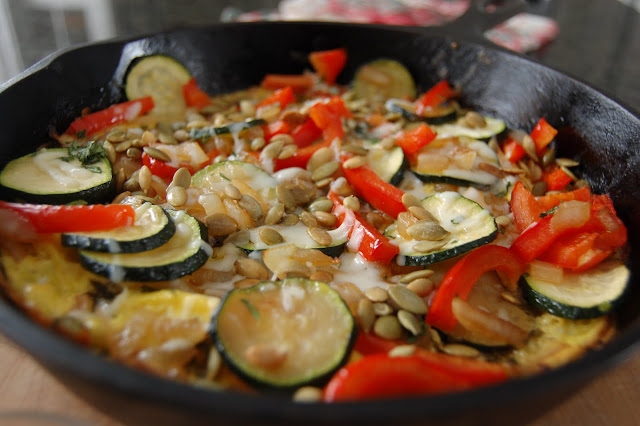 Pepitas, or pumpkin seeds, have been making frequent appearances in my recent pursuits in the kitchen. I'm growing quite fond of tossing them into dishes whenever I can to boost crunch and add a nutty flavor. After recently making a salmon dish that uses pepitas as a crust, I stumbled across a frittata recipe that incorporates the seeds as well. Always looking for ideas to adapt one of my favorite egg dishes, this frittata from Heidi Swanson had some unique flairs (including pepitas) that I caught my eye and my appetite.


Heidi's version differs from frittatas that I've made in the past, not only because it uses crunchy peptitas to juxtapose the creaminess of the eggs, but also because of its noticeable separation of the ingredients. Traditionally, frittatas set the accompanying ingredients within the egg mixture itself, where they become imbedded in the eggs as they set. Yet this variation uses an alternative preparation technique -- the vegetables are cooked first and set aside, allowing the eggs to cook alone. They are incorporated back into the dish atop the nearly-set eggs and only then is the entire group baked together in the oven. The method is interesting as it allows the ingredients to be more individually pronounced -- the vegetables don't become lost in the egg mixture, and as such, the egg retains its integrity as the base of the meal. Another magic touch in Heidi's frittata is the addition of a cilantro sauce that is drizzled over the egg mixture just before adding the vegetable, cheese and pepita toppings -- an almost pizza-like style of preparation.

Here is my take on Heidi's inspiring dish:

Directions:
1. Preheat oven to 450 degrees.
2. Make cilantro chile sauce by pureeing garlic, olive oil, lemon juice, cilantro, chile, cumin and salt until smooth. Set aside.
3. In a medium bowl whisk the eggs. Set aside.
4. Heat a medium ovenproof skillet over medium-high heat. Add olive oil and onion. Saute, stirring constantly, until onion begins to brown, 3-5 minutes.
5. Add zucchini and red pepper, cover, and cook for another 3 minutes. Slide vegetable mixture onto a plate and set aside.
6. Turn down the heat a bit. Add the eggs to the same skillet and cook over medium-low heat until the eggs are just set. There shouldn't be a lot of liquid running around the pan, so tilt and pan and use a spatula to allow the uncooked eggs to run underside and cook.
7. Once nearly set, drizzle the eggs with a few tablespoons of the cilantro chile sauce. Add the zucchini-pepper mixture on top.
8. Place the skillet in the oven and bake for about 7 minutes, until well set and puffy. Sprinkle shredded mozzarella cheese, parmesan and pepitas over top of the frittata and cook an additional 2 minutes.
9. Remove from oven, cut into wedges and serve. 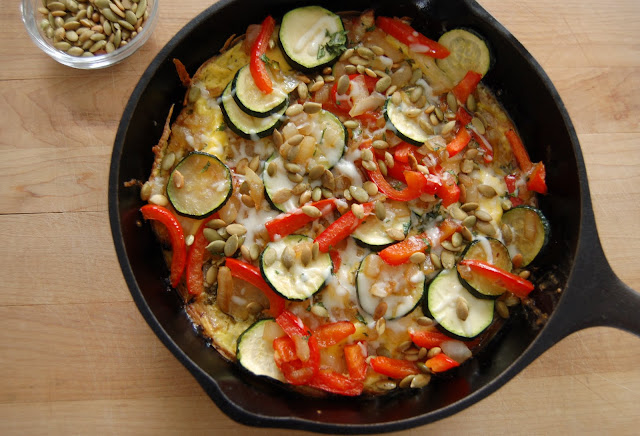