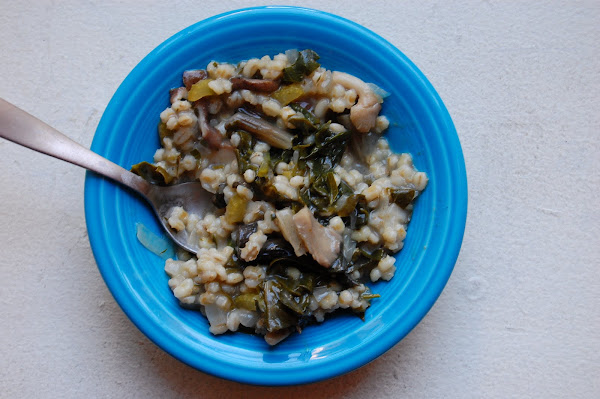 When I saw the recipe for Barley and Greens Gumbo in Every Day with Rachael Ray magazine, I immediately thought of the Hen of the Woods Gumbo that my friends and I recently had at What Happens When restaurant in NYC. Both dishes draw on flavors from forest, with greens and mushrooms as the star ingredients. I combined the two in my own version to create the ultimate woodland-inspired gumbo -- a belly-warming stew that pays homage to wild mushrooms and leafy spinach and swiss chard. Traditional gumbos incorporate rice and broth; in this case, fiber-rich barley plays the starchy role, adding hearty thickness to the dish. The version I adapted from Rachael Ray's uses water as the liquid -- I think next time I will substitute a type of broth for part of the water to give more depth to the flavor. Another variation I might try is to grill the mushrooms separately to give them a more distinct meatiness before adding them to the gumbo. I may also try Hen of the Woods mushrooms next time, as they did at What Happens When. Okra and/or escarole might make an appearance as well...

Directions:
1. In a dutch oven, heat the oil over medium-high heat. Add the celery, onion and mushrooms and cook, stirring occasionally, until softened, about 5 minutes; season with salt and pepper.
2. Add the flour and cook, stirring often, for 5 minutes.
3. Add the swiss chard stems and cook for 1 minute. Stir in the barley and 6 cups water and bring to a boil. Lower the heat, cover and simmer until the barley is just tender, about 30 minutes.
4. Working in batches, add the spinach, parsley and swiss chard leaves, stirring the greens until wilted between each addition. Season with salt and pepper.