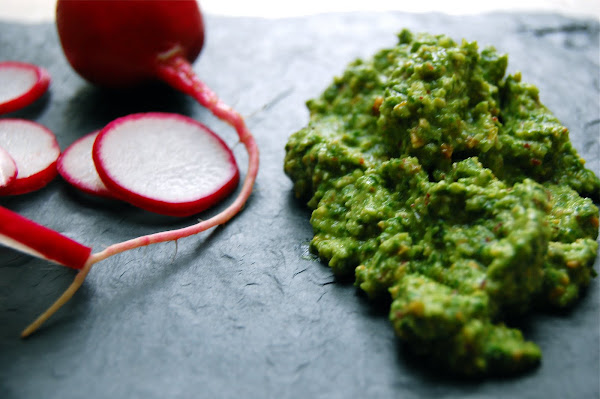 I picked up a bunch of radishes at the farmer's market this week and as I was debating what to do with them, Tasting Table answered with one of its daily e-mails. They shared a few interesting radish recipes that elevate the root from its status as a salad topper-- one from their own test kitchen for a Radish Pesto. I was intrigued to try this unique pesto that does not use the radish itself as I had expected, but instead the radish leaves -- an often discarded portion of the vegetable. In my preparation I made a few adjustments to the recipe. It calls for macadamia nuts, but I opted try two alternative versions -- one with pistachios and another with hazelnuts. I used Pecorino instead of Piave cheese and also decided to throw in some whole radishes to give it an extra radish-y twist. The results were fantastic and highly enjoyable with a plate of linguine. The radish has officially claimed territory in the realm of pesto.

Directions:
1. Separate the radish bodies from the greens; wash well and set radishes aside.
2. Divide all ingredients in half, designating one portion for the hazelnuts and one for the pistachios.
3. Roughly slice 6 radishes, adding 3 to each set of ingredients.
4. In a food processor, add one set of the radish greens, basil, shallot, garlic, Pecorino, lemon juice and zest, olive oil, hazelnuts and three sliced radishes. Blend until smooth.
5. Repeat step 4 with pistachio batch.