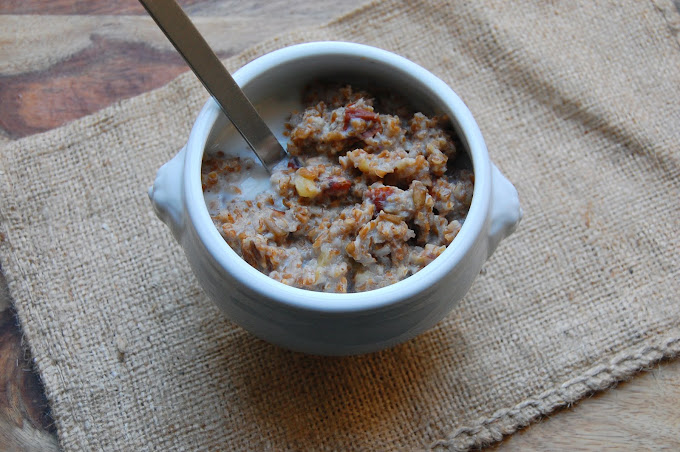 Ever since I found myself out of oats one day and subbed in bulgar, it's become my preferred hot cereal grain. I've explored an infinite number of variations on the theme, one of my favorites being adding mashed banana (think: banana bread in a bowl). Reinforced with bran and flax, backed by a team of nuts (chopped almonds) and seeds (sunflower), and laced with floral honey, the bulgar essentially puts you on a path for a good day. But, since I perpetually reach for new ways to elevate (and/or re-create) my recipes, I gave cardamom a rookie shot in this particular batch, knowing its flavor would bring a new dimension to the cereal. I've been on a cardamom kick for a while, loving its versatility and the way that it weaves spicy-sweetness throughout a dish. Here it pairs magically with banana -- this might be my favorite version so far.

1. In a medium saucepan, bring almond milk and 1 cup water to a boil. Add bulgar, wheat bran and ground flax and reduce to a simmer. Cook for 20 minutes -- adding additional water as it absorbs.

2. Meanwhile, mash one banana and roughly chop the almonds. Set aside.

3. When the water is nearly absorbed -- the bulgar should be creamy, yet retain its texture -- stir in honey, mashed banana, almonds and sunflower seeds. Add cardamom, a bit at a time, adjusting to taste as preferred.

4. Serve with additional honey drizzled on top and/or more milk as you prefer.